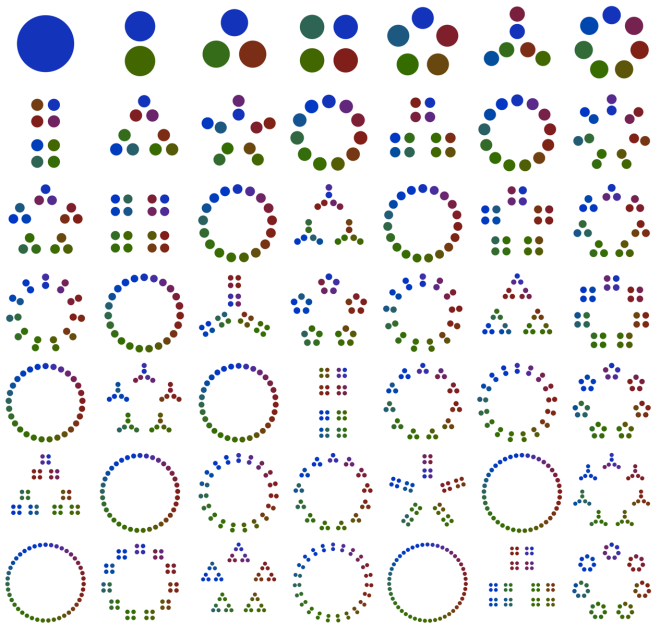 Malke Rosenfeld shares yet another great project idea on her blog, which you can read in more detail there. I love the visual she found above, and I think that it, and the program that was used to create it, could be a start to an interesting investigation into number factors, and perhaps other patterns.

This is another project idea from Malke Rosenfeld. The basic idea is this – students create their own versions of an attribution matching game. In these games the idea is that each card in the game is unique, but that it has traits (like colour, shape, type, etc…) in common with other cards, and the objective of the game is usually to try and create matches based on those attributes.

Read her blog post to get a more complete description of how this project works. 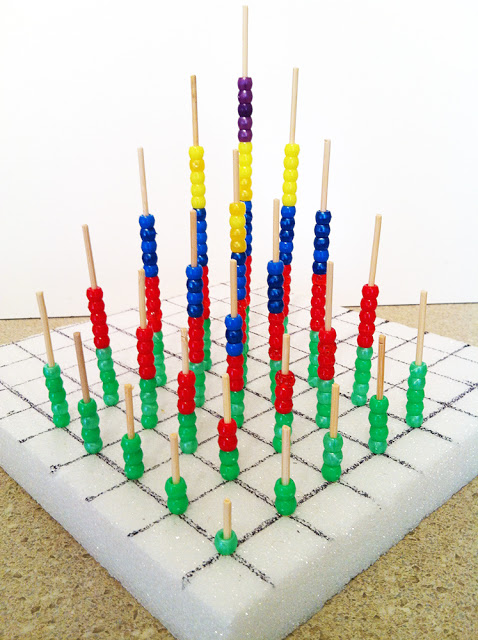 This idea comes from Malke Rosenfeld. There are other ways of arranging the tower, so while the diagram above should give you some ideas as to what a multiplication tower is, you and your students should adapt this project. Additionally, once it is built, you can use the tower to look for patterns in multiplication.

Here are a couple of addition problems. Can you figure out what the student is thinking here? Thanks to Chris Hunter for the submission.

This next example comes from Sue VanHattum.

When do children start using logical reasoning? Can we find other examples of children thinking like this?

This submission comes from Malke Rosenfeld. It is work her daughter produced independently, at age 6, while playing with some tangrams.

Here’s what I found my dear child doing with the set of car tangrams (inside for some reason) over the last few days.

By way of setting the scene, I should tell you that the kid generally initiates and works independently on any project she pleases during her afternoon quiet time, usually with the company of an audio book. A few days ago during this time she informed me she was “making a math book.” I had observed her tracing tangrams, but was surprised to find that she was doing it in a deliberate way, and that she was also able to clearly describe her discoveries and observations to me. Here is the book, so far. I am just a scribe here — these are her words as she dictated them to me, except where noted: 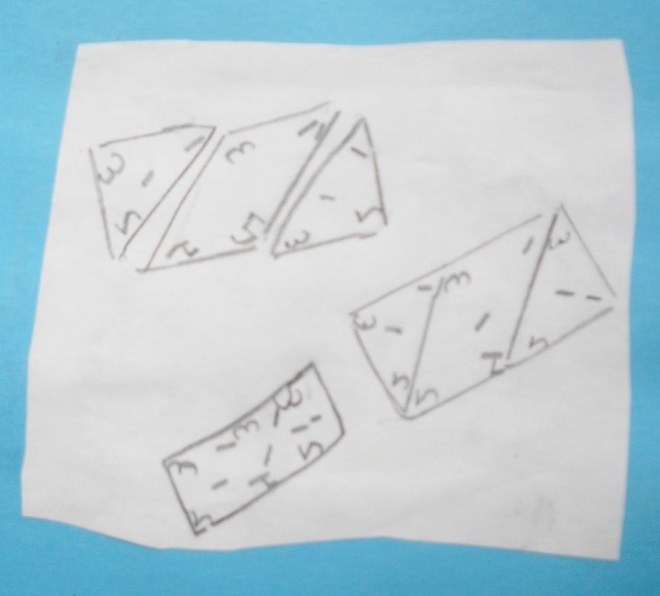 “This rectangle you see is made up of a parallelogram and two triangles. Really they’re just shapes, but when you put them together they make a rectangle.” [It looks like she’s numbered the inside angles of the individual shapes. It also looks like she is again showing the process individual shapes merging into the intended new shape.]

“The square and the rhombus that you see here, their edges are both the same length. The difference is a rhombus is a squished square, squished to its side. The rhombus has two larger angles and two smaller angles than the square. But the square has the same angles on each corner.” [These are actually tracings of shapes from the pattern blocks set we have. The ruler markings was her idea for comparing the two shapes. I supplied some new vocabulary in the form of ‘angles’ and made some observations about the difference by overlapping the two shapes, in an effort to help her observe and further articulate the difference between the two.]

I think this is a terrific example of some early geometric reasoning. Clearly Malke’s daughter has learned some mathematical vocabulary from her parents, and has the time and space available to do this kind of exploration. What other things have to be in place for children to be able to make these observations?

My son and I had this exchange earlier in the day when we were negotiating about whether or not we would watch an afternoon movie.

Easier question: What’s the biggest success here?
Harder question: How does this kind of number sense develop in children?

This work is licensed under a Creative Commons Attribution-NonCommercial-ShareAlike 3.0 Unported License.
Math Thinking
Blog at WordPress.com.